This ecumenical group met often as prayer cells in homes and later on met once a month at ‘Asbury Methodist Church at 3400 Chestnut Street’ and ‘Episcopal Church of the Saviour, 3723 Chestnut Street, Philadelphia PA 19104’ from 1972 to 1975.

In 1976 August, Late Rt. Rev. Easow Mar Timotheos Episcopa visited the worshipping community at Philadelphia, and with the encouragement of Thirumeni, the ‘Mar Thoma Christian Congregation’ of Philadelphia was formed.

On October 1st, 1976, a meeting of all Mar Thoma members was held at Muhlenburg Lutheran Church, 13th & Ruscomb, Philadelphia, under the leadership of Rev. K.S. Mathew. In that meeting, it is decided to have Malayalam Holy communion service on 2nd Sundays and divine service on 4th Sundays.

Since then, we were worshipping at the following places:

In 1977 October, the Mar Thoma Christian Congregation prepared its bylaws, which was approved by the Missionary Bishop Rt. Rev. Dr. Philipose Mar Chrysostom Episcopa with effect from November 1st, 1977.

In 1978, September the congregation was officially approved by the Mar Thoma Church Synod.

In 1979 May, the Mar Thoma Christian Congregation of Philadelphia was registered as a non – profit organization with the Commonwealth State of Pennsylvania.

In 1983, the congregation was approved as a ‘Parish’ by the Mar Thoma Church Synod

In 1985, Parish was registered in the Commonwealth State of Pennsylvania as ‘Mar Thoma Church, Philadelphia’ as a non – profit organization.

In 1987, Bethel Mar Thoma Church, Philadelphia formed as a sister church of our parish.

In 1987, a property at 6104 North 7th Street, Philadelphia was bought for parish parsonage.

In 1989, Parish acquired its own place of worship at 2060 Orthodox Street, Philadelphia under the leadership of Rev M. C. George. This church building was dedicated by the Diocesan Bishop Rt. Rev. Dr. Philipose Mar Chrysostom Episcopa on June, 9th 1990.

In 1997 Parish Parsonage was relocated and purchased the property at 9234 Darlington Road, Philadelphia, PA – 19115

In 1998, Ascension Mar Thoma Church, Philadelphia formed as a sister church of our parish.

In 2001, October, our Parish celebrated its Silver Jubilee.

In 2005, St Thomas Mar Thoma Church, Delaware valley formed as a sister church of our parish.

In 2010, December 28th we relocated our worship place by purchasing a property located at 1085 Camp Hill Road, Fort Washington, PA 19034 under the leadership of Rev. Philip George.

In 2011 March 26th, this facility was dedicated as the place of worship for the Mar Thoma Church, Philadelphia by Rt. Rev. Dr. Geevarghese Mar Theodosius Episcopa.

Let us thank and praise God for all the bishops, priests, and lay leaders who provided necessary guidance and leadership to us in all these years. As members of the church, let us surrender ourselves under the mighty hand of God so that He may exalt us and use us for His glory in the years to come. 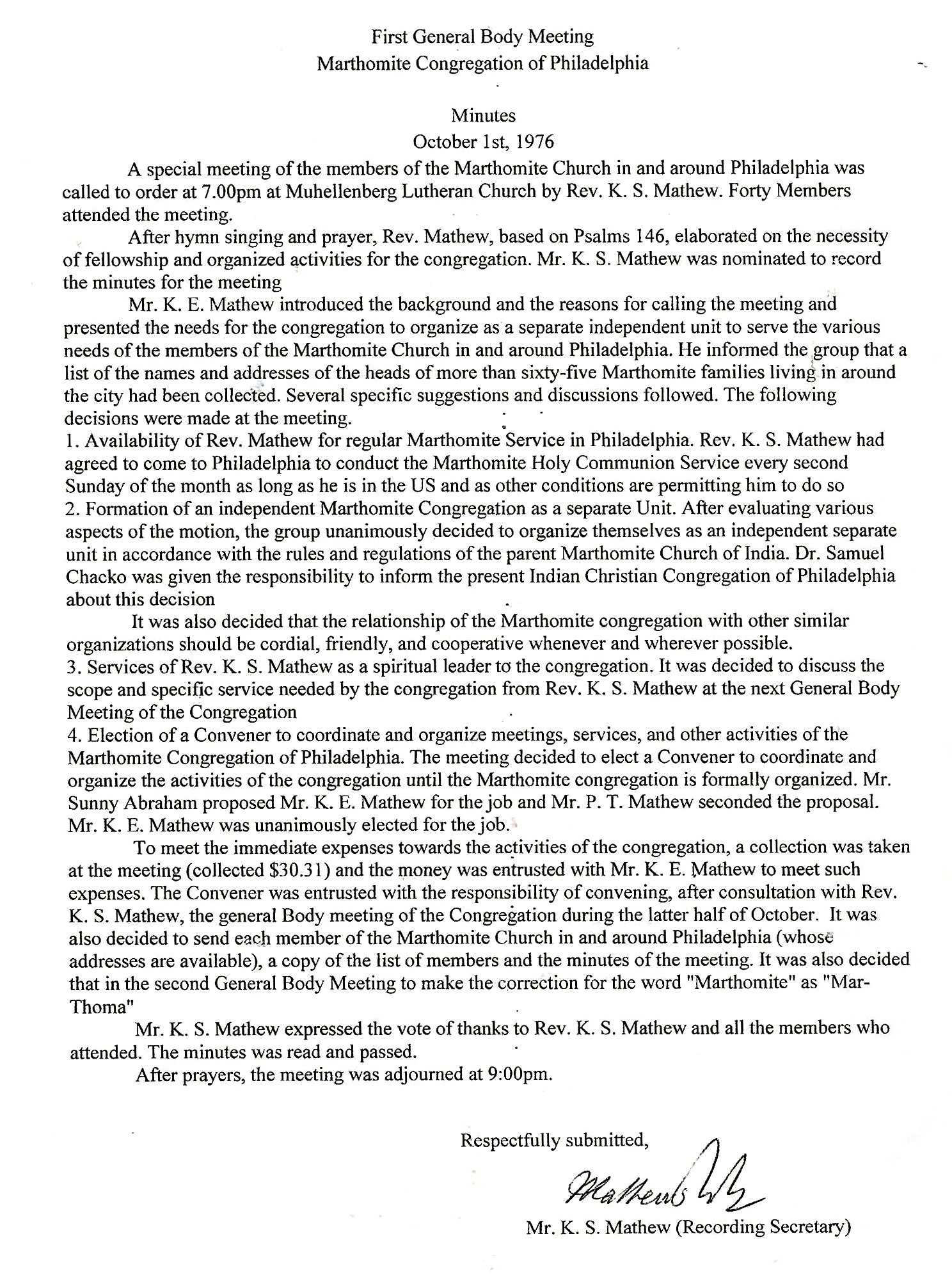 “Therefore go and make disciples of all nations, baptizing them in the name of the Father and of the Son and of the Holy Spirit, and teaching them to obey everything I have commanded you. And surely I am with you always, to the very end of the age.”